Why The Macro Diet Is Different 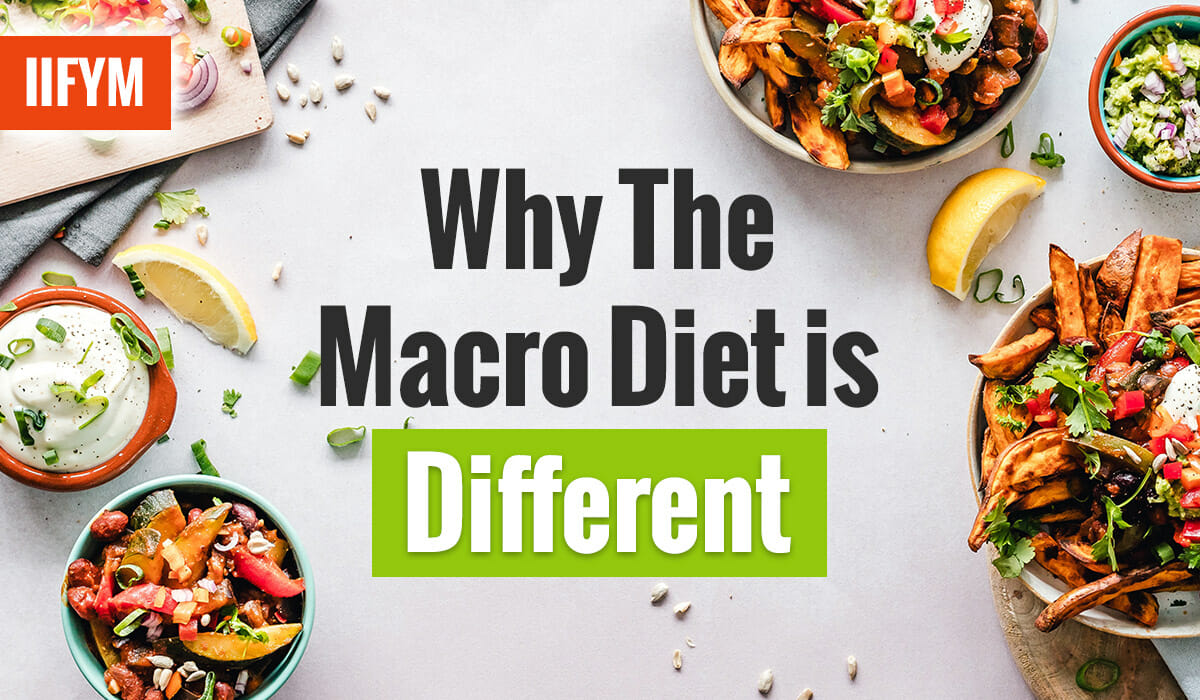 Tracking macros vs calories vs keto vs paleo

That is a tidbit of conventional wisdom that most people would concede to in a heartbeat without batting an eye. Perhaps, one that you are probably nodding in agreement with as you read it. However, you know I’m about to challenge it.

Anyone who has tried to lose weight or get fit using traditional dieting plans would agree! And that included me not long ago.

You see, the thing with traditions and conventional wisdom is that they seldom concern themselves with reality. Or truth for that matter. In fact, more often than not, conventional wisdom is what keeps people from taking advantage of newly acquired knowledge, regardless of the evidence to support it, or the proven benefits attached to it.

That’s why there are still people out there thinking that saturated fats are to be avoided like the plague, or that fresh fruits and vegetable are absolutely better than their frozen counterparts. No matter how much evidence suggests otherwise.

In that sense, nutrition and dieting have been fertile grounds for speculation and misinformation for decades. Derived from mountains of inaccurate studies – and sometimes blatant lies – advertised by so-called experts, and dishonest organizations chasing profits.

Many of these mistaken notions about food and how our bodies interact with it, remain even to this day. Distilled into those tortuous and difficult-to-follow diet programs we’ve all grown to hate.

Now, once more, science knocks on our door and tells us that we’ve been doing it wrong.

There is indeed an intelligent, fact-backed, and reliable alternative to losing weight and get in better shape. The best part is that it does not require us to endure draconian nutritional habits, or taxing workout sessions.

A way that works. And one that differs entirely from the idea we all have of dieting.

If you think dieting is hard, perhaps you need to understand why the macro diet is different.

It Doesn’t Make You Miserable

The number one reason why the majority of people abandon diets is that they start to feel miserable right off the bat.

Most diets are incredibly restrictive. They all force you to leave out all the food you like entirely. Not for a week. Not for a month. For the rest of your life. Or at least for as long as you wish to keep losing weight.

That’s an absurdly demanding commitment to ask of anybody!

Not only can it affect negatively your mood each time you get a caving for something you can’t have (which is basically every day when all you eat is canned tunas and rice cakes). But it can actually become a major issue in social gatherings.

Everyone’s enjoying that soft piece of cake at a birthday party, while you compulsively chew on your no-sugar gum. You sit, grumpily stabbing at a salad bowl with your fork, while your friends enjoy their buttery popcorns, soda, and pizza slices during movie night.

With traditional dieting, 90% of the challenge is having the mental discipline to go through these situations. No wonder why most people, even those that are truly committed to losing weight, end up giving up eventually.

The macro diet doesn’t make you suffer by keeping away the food you love! If it fits your macros, you can have it. It is that simple and works marvelously. Forget about being miserable, constantly thrashing for another drop of willpower. Just track your macros and enjoy the food your love.

It Doesn’t Require Workouts to Work Out

Another big issue I had with regular diets was that if you wanted to see results, you had to break your back at the gym or run around like a madman doing cardio.

And don’t get me wrong: I LOVE working out. Exercising is amazing for you and gives you many benefits beyond just losing weight.

But the fact of the matter is that making time to go to the gym on a regular basis – on top of the other hundred things you need to take care of on a regular day – becomes unrealistic in most cases.

I’ve also had many friends whose sole purpose for training was losing weight. The sight of them overtaxing their bodies, and even injuring themselves, while failing to reach their weight loss goal for the month was painful to watch.

That is not a healthy way to go about dieting.

One of the main draws the macro diet has – beyond being able to eat what you like – is that it has been proven to work, whether or not you decide to exercise.

If you start tracking your macros and applying the system, you will lose weight. Plain and simple.

When following the macro diet, working out becomes an entirely enjoyable activity. You train and exercise because you want to. Not because you have to.

It’s Based On Facts and Nutritional Science

One of the strongest points of the macro diet – and sadly, one that most people gloss over even before trying it – is the fact it’s founded in science.

Macro diets are strictly centered around math, and a nutritional understanding of how our bodies process the chemical components they get from foods – Carbohydrates, proteins, fats, and alcohol.

By calculating a formula tailored to your specific body and nutritional needs, you get to play around with your food intake into a method that works for you. 100% of the time. And without sacrificing the things you love to eat. No other dietary system in history can claim that.

Most importantly, macro diets do perpetuate outdated notions and flawed beliefs about nutrition.

Did you know the first food pyramid was created in conjunction with the department of agriculture? Talk about a conflict of interest! No wonder they used to recommend eating such vast quantities of carbs.

Even today, many of those misconceptions about nutrition are the basis behind the popular diets out there.

Macro diets ditch all of that. No old wives tales. No myths about good or bad foods. If it fits your macros, you can eat it. And you’ll be losing weight while you are at it.

Let’s get real for a second.

If you’ve read this far, chances are you’ve already tried traditional diets, and they have failed you just like they failed many others.

Sometimes that failure comes from following flawed nutritional advice. Sometimes, it comes from the lack of results within a reasonable timeframe. Sometimes, they fail because you feel that if you open up another can of tuna and shove it down your throat one more time, you’ll go insane.

Whatever the case, traditional diets have proven time and again to be untenable, and wildly ineffective.

When it is all said and done, the main reason why the macro diet is different is that it works.

Calculate your macros and stick to the system and you’ll start seeing amazing results in a short amount of time. As opposed to other weight loss programs and flawed nutritional plans.

Macro diets are able to produce such results because they are tailored to your body and your needs. It accounts for the energy you require and the fuel you provide it. And as long as you keep true to the system, there’s just no way of missing your target.

The macro diet doesn’t depend on your state of mind, energy levels, or expect you to leave behind all the foods you love. It doesn’t require you to develop a monk’s iron will either.

The macro diet is different because it is an intelligent, science-based approach to being healthy and losing weight. And that’s way more than you can say about other weight loss plans out there.