We Are the Original IIFYM • About IIFYM and Anthony Collova 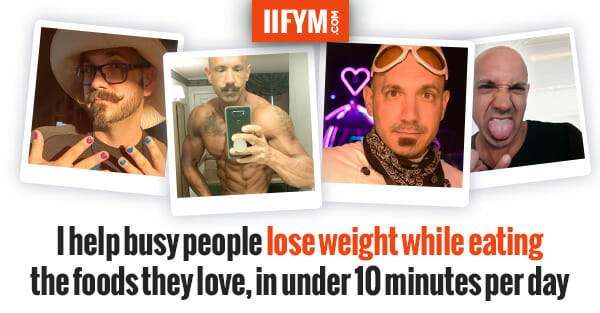 Where it all started for IIFYM…

Once upon a time…

Instead, they ate magical “clean” food 6 times per day, which made them unhappy.

And that is where my story begins.

How drug addiction, ADD and divorce helped me lose 70 lbs. and find my purpose.

My name is Anthony Collova.

I am the founder of IIFYM.com and the creator of the macro calculator you used yesterday.

I’m also the creator of 17 other macro calculators currently being used on over 200 websites by various companies and nutrition coaches.

I’ve been doing this for 15 years now, and I’m damned good at it.

If that is cool, keep reading. If not, just scroll down…

Who I am, and how I launched the IIFYM movement.

About 17 years ago I found myself 3 year sober and divorced.

Next to getting sober, being betrayed and alone was the most difficult and painful thing I had every experienced.

Maybe even worse because there was nothing I could do about it. I couldn’t get her back, and knew that I shouldn’t anyhow.

I was torn up, inside and out.

This was not how I imagined my life would end up.

Depressed, alone, and unable to cope with my pain..
Even day that went by, I ate more and more food and began hating my reflection in the mirror.

I wasn’t ready to start dating again but I knew that if I didn’t make some changes, I’d never attract the right kind of person into my life that I wanted.

So I got to work and set out to lose the weight my ex-wife always complained about.

Hell, I already changed my entire life when I got sober.
How hard could losing a few lbs. be?

Yeah. so… Turns out, it’s really freakin hard.
Or rather.

It was for me, at the time. Now, burning fat is super easy. (more about that in a minute).

Before I discovered the technique that I’ll share you you shortly, losing weight seemed impossible, no matter how committed I was.

Determined to rebuild my life (And my body), I kept at it.

So, every day I’d read the nutrition blogs and websites, trying to figure out what the secret was. There had to be one. I just knew it.

I interviewed the best doctors, dietitians and specialists I could find.

I hired the most popular diet coaches around and even signed up to do a few bodybuilding shows.

I spent years dissecting the info and meticulously assembled it in a way that made sense in my head.

See, I’ve got some pretty sweet ADD so I don’t learn in the same way that most people do. I’ve struggled with this my entire life, and eventaully over came that too (I actually wrote a book that is going to be published in a few months).

As it turns out, the learning disability that haunted me as a child would be the key to finding my purpose and passion as an adult.

As I scoured over all the before and after results I could find I’d get more and more excited, closer and closer to figuring it all out.

Over and over I’d obsess over the smallest of details until finally, I could picture it in my mind.

That’s how I learn.

The pictures in my head have to make sense

Until that happens, nothing in my life works.
…again, it’s a curse, and a blessing.

Once I was confident that I figure out the secret to immediate and sustainable fat loss, I tested it out on myself. At 70 lbs. overweight, I started the program that I spent forever obsessing about.

The first thing I did was remove the batteries out of my scale.

See, my research told me that in order to burn fat, I had to increase my metabolism and stop starving myself. But this mean that I needed to increase my carbs to levels I really wasn’t comfortable with.

God this was scary.

I mean. I knew the science part of my program was strong enough, but was I?

Did I actually have the discipline to follow the diet I spent so much time perfecting?

As it turns out, the dedication was the easy part.
The tricky part was actually eating enough carbs to make it all work.

And that was the key. carbs.

So, unlike every other fad diet out that that wanted me to reduce carbs, and tank my energy level, my program had me do the opposite and eat as many carbs as I could get away with, in order to turbo charge my metabolism.

Scary stuff for sure, but once I realized that I could spike my carbs from a few glasses of orange juice, things got much easier, and fun.

Something I though dieting would never be. Fun!

Every morning I’d start my day with a tall glass of OJ and end with an even bigger glass right before bed.

Two weeks later, I pulled the scale down off of the shelf in my closet.

I stepped up, gave it a second and with one big exhale I looked down.

Now, I don’t want to type out all of the curse words I shouted at the scale that day…

…but as I stood there, pointing my (middle) finger at it.

I knew that the scale no longer owned me and I would forever be in control of my weight, health and happiness.

It took 6 months for me to drop 50 lbs. but in that time I totally transformed my body.

I spent the next 2 years dialing in the strategy to create a Blueprint that would work for anyone, at any time.

I absolutely had to prove to myself that it was not a fluke.

That I wasn’t some sort of special case. That anyone that followed the same steps I followed would get the same, predictable results.

Over those 2 years I tested my Blueprint out on over 500 people. Clients that I hooked up in exchange for feedback.

I adjustment-ed my Blueprint where required, keeping the techniques that gave busy people the most leverage possible and ditching the rest.

In other words, I only wanted my clients to implement the most effective and easy to follow parts of the Blueprint, so that anyone, at any level could lose weight. It had to work for everyone:

This meant keeping the Blueprint simple.

Showing busy people how to lose weight while eating the foods they love, with or without exercise.

Once I successfully did this for 500 free clients I started charging people.

Mostly busy executives that wanted immediate results and didn’t have time to waste on a strategy that slowed them down, or didn’t provide massive results.

Because my Blueprint was rock solid, I was able to charge my VIP clients $1000 per month for my coaching services.

(I learned early on, that the more I charged, the more people we successful since the money they spent, held them accountable to their goals)

Eventually, the daily stress of working with high level executives added up, so my days of 1 on 1 coaching came to and end.

Don’t get me wrong.
I still wanted to help people. I just just had to protect myself from the emotional stress of others.

It wasn’t long after that I decided to set my Blueprint live to the world without the 1 on 1 coaching.

That’s when I built the IIFYM macro calculator and helped other showed other busy people how to lose weight while eating the foods they love.

Over a decade later, I am currently on the 7th version of the IIFYM macro calculator and it gets used about 5000 times per day.

I am always making improvements based on the feedback from my clients so that I continue to help as many people as I can, but the Blueprint I crafted is pretty much the same (though I only charge $97 for it now since it doesn’t come with my phone number for personal coaching).

It has been an awesome ride and it is only getting better.

I’ve since built over 150 macro calculators for other websites, companies and coaches and together, we are changing the world!

Though no other calculator uses my secret formula for calculating macros.

…Still, people all around the world are hearing about how effective tracking macros is as a result of the pain I found myself in after my life crumbed before my eyes.

Looking back, I wouldn’t change a thing!

I’m helping too many people.

Busy people that want to lose weight while eating the foods they love.

…and without fail, almost everyone asks the same 3 questions:

1. Are these macros right? Can I really lose weight eating this much food?
2. What foods should I eat to hit my macros and lose weight the fastest?
3. How do I get started tracking macros?

Over the next few days I’ll be answering these 3 questions, plus more.

I’ll be sending you macro friendly recipes along with a few resources to lower your stress, end your confusion and get you out of overwhelm.

Now, if you want to skip to the head of the line and have me lay it all out for you can get the same Blueprint that my same private clients used to spend $997 per month for, for just $97 check out my Blueprint here.

It’s like having the answers to the test before you even walk in to the classroom. The best part, is that it works 100% of the time for 100% of the people that follow it.

PS.
I am totally cool if you reply back to this email with questions, but if you want immediate answers, you might want to consider joining the IIFYM Facebook group where me and my macro coaches are super active